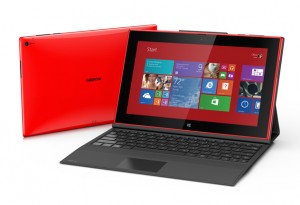 Nokia has revealed its first tablet, the Lumia 2520. It promises to be the first tablet that’s “actually mobile” according to Nokia. I am sure that the Apple iPad Air has something to say about that.

The Lumia 2520 is Nokia’s first foray into proper tablet territory and, according to the Finnish phone firm, it’s the first tablet that’s “actually mobile”.

So what does “actually mobile” mean for this new Nok? It basically means it has 4G LTE and Wi-Fi connectivity, while 80% of tablet PCs are Wi-Fi-only. well, that makes a little more sense.

Nokia was also keen to big up the screen. It claims to have the highest peak brightness and lowest reflectance of any tablet device currently available. That means everything should be clearly visible in direct sun, or in gloomier conditions.

Camera-wise the 2520 is packing a 6.7-megapixel snapper round the back with Carl Zeiss optics. That’s pretty good for a tablet

Just like the Microsoft Surface 2, it has its own keyboard, too. Named the Nokia Power Keyboard, it boosts the device’s battery life by five hours, and has a gesture trackpad as well.

Microsoft Office and Outlook also come preinstalled. A growing reminder that Microsoft is in the process of acquiring Nokia.