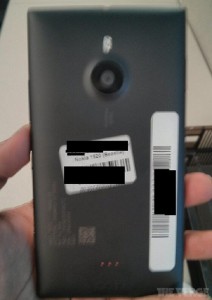 Yesterday we saw a number of photos of the purported Nokia Lumia 1520, a 6-inch phablet running Windows Phone 8 GDR3 with top of the line specifications. Now there’s a good picture of the device and it’s a Beastie!

On top of the other rumours flying around regarding the huge phone it looks as though that the device will indeed be called “Beastie” at AT&T.

Tom Warren of The Verge has posted a tweet of the purported Nokia 1520 for AT&T with a codename “Beastie”.

The device is expected to feature a 6-inch Full HD display 1080p resolution, quad-core chipset and a possible 16MP camera with PureView technology and possibly optical image stabilisation as well.

With so many leaks popping up on the interwebs so regularly, surely it can only be a matter of time before this Beastie of a phablet is launched.

Rumors suggest that Nokia will schedule an event by the end of this month where the Finnish maker is expected to announce the much-anticipated Nokia Lumia 1520 amongst some other devices.

Can the Nokia Lumia 1520 help the Finns (and Microsoft) make up ground on other makers?