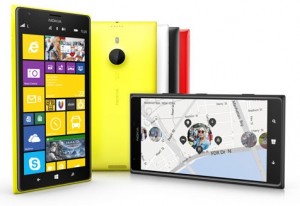 Nokia CEO Stephen Elop took the stage in Abu Dhabi and unveiled the much rumoured Nokia Lumia 1520. We’ve seen the phablet getting leaked extensively in the run up to the official unveiling but here’s the truth about the new Nok Windows Phone phablet.

If you’ve been waiting for a flagship Windows Phone phone that packs a 6-inch 1080p display, high-resolution 20-megapixel PureView camera and the top-of-the-line processor (a quad-core Snapdragon 800), then this could be the one.

The Nokia Lumia 1520 is the much leaked, big-screened smartphone, which has finally been announced at Nokia World in Abu Dhabi.

The new Lumia has a screen that’s large enough to accommodate a third row of live tiles, and the 1520 will also come with GDR3 – the very latest Windows Phone 8 build.

It’ll be Nokia’s first Lumia to arrive with Nokia Camera, a new camera app that fuses the best of the Pro and Smart cameras that came before it.

The body is recycled polycarbonate and will come in red, white, black and yellow. The first two are glossy, while the latter two come with a matte finish. It’ll initially land, unsubsidised, at a cost of $750, launching in Asia and Europe later this quarter.

This time around, the camera’s pegged at 20 megapixels, with a BSI f/2.4 Zeiss lens, with optical image stabilisation along for the ride.

There’s also something Nokia calls the Refocus Lens, which is a fruit of the company’s Scalado acquisition; this lens is like a software-based version of Lytro, which uses “clever algorithms” to let you change the focus of your photo after it’s taken.

Nokia’s also bumped up the microphone count to four on its new Lumia, supporting stereo audio capture, while with 32GB and microSD-expandable storage up to 64GB, there should be plenty of room for your tunes, as well as your photos and video.

Not only is it the first 6-inch 1080p smartphone to run Windows Phone OS, it’s also the first that’s powered by Qualcomm’s Snapdragon 800 SoC (a quad-core chipset clocked at 2.2GHz).

The Nokia Lumia 1520 comes with Microsoft Office pre-installed with 7GB free SkyDrive storage to back up your documents and edit them on any drive.