Nokia London Flagship Store To Close Before its Second Birthday 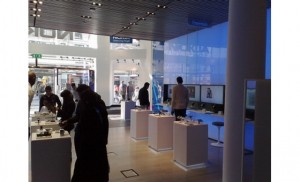 The Finnish flagship presence on Regent Street is due to close after only opening in February 2008.

A familiar trend in these times of the crunch, the store is closing for the same reason most stores are closed: itâ€™s not paying for itself.

A Nokia spokeswomen declared that itâ€™s â€œnot been as efficient or as profitableâ€ as the company hoped it would be.

The Nokia Regent Street store offers various services and phones that are either unlocked, or connected to the major UK carriers (O2, Vodafone, T-Mobile, Orange and 3). Customers were treated as “guests” and could play unhassled with handsets.

The store, in the former Dickins & Jones building near Oxford Circus and just a hop-skip-and-a-jump away from the Apple Store, is likely to close early next year.

About 30 people will become jobless after the 7500 square foot store is closed.