Nokia is Crashing – “Standing on a Burning Platform” 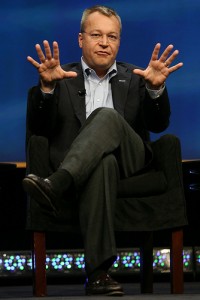 Word from Nokiaâ€™s own CEO, Stephen Elop, in a rather frank and pointed memo to staff at Espoo described the Finnish phone firm as â€œâ€¦standing on a burning platform,â€ and facing a battle on all fronts.

Elop starts as he means to go on by stating that â€œâ€¦we have multiple points of scorching heat that are fuelling a blazing fire around us,â€ and openly admits that Apple owns the top-end smartphone market and that in four years they have â€œchanged the gameâ€ and that Nokia, â€œâ€¦still donâ€™t have a phone that is close to their experience.â€

So what about the middle market? Well, in Elop’s eyes that’s been taken because:

â€œIn about two years, Android created a platform that attracts application developers, service providers and hardware manufacturers. Android came in at the high-end, they are now winning the mid-range, and quickly they are going downstream to phones under â‚¬100.â€

Nokia has generally been a favourite in developing markets due to the durability of their handsets and uncomplicated operating systems but they’re now being hassled by local manufacturers in China, who are able to undercut Nok.

He’s less than impressed with MeeGo as well – â€œWe thought MeeGo would be a platform for winning high-end smartphones. However, at this rate, by the end of 2011, we might have only one MeeGo product in the market.â€

Perhaps he’s going to listen to some advice and join forces with WinPho7 or even Android?

Stephen is definitely not a happy little bunny and it seems that he wishes he could turn back time:

â€œWe fell behind, we missed big trends, and we lost time. At that time, we thought we were making the right decisions; but, with the benefit of hindsight, we now find ourselves years behind.”