Nokia Headphones get the Beats Treatment in Monster Partnership 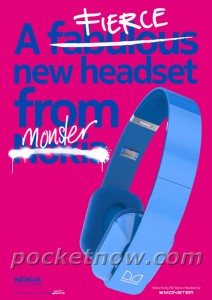 Nokia seems to be trying everything to get back to where it once was. The latest tactic appears to buddy up with Dre’s favourite headphone maker: Monster.

Spotted on a leaked poster it certainly looks as tho the Finnish phone flogger is joining forces with one of the flavours of the moment.

The product is titled the Nokia Purity HD Stereo Headset by Monster – if you look carefully at the bottom right of the picture.

Is it just me or does the design of the Nokia Purity HD cans look more than a little similar to those classic B&O heaphones?

Monster is doing quite well at the moment. Not only do they build their own range of ear-pleasers but they have Dr Dre, Justin Beiber and David Geutta signed up to them. Not forgetting that the Beats tech is appearing in laptops and phones now!

Perhaps that’s what the “Head Turning Technology” which has been changed to “Head Thumping Techno Bass.” is referring to?

Now, let’s just see if Nokia can get there without firing anyone else 😉