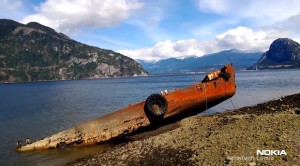 Nokia is taking to the skies with the latest teaser for the new Nokia Lumia Windows Phone flagship mobile but, more interestingly, Vodafone has confirmed that the new Lumia will land in the UK.

Another day, another new Nokia video – this one is quite scenic though.

Nokia has yet to confirm what their new Lumia will be called. At the moment I’m sticking with the Lumia 928 but there are whispers saying that it might be named 925 depending where you are.

Whatever it’s called, we’ve already seen the PureView camera of the forthcoming Lumia pitted against the Samsung Galaxy S3 and iPhone 5 on a nocturnal roller coaster ride, followed by a subterranean brass section sound off of audio between the Nokia and S3.

This time it’s another camera test in order to show off the new smarty’s snapper’s shake reduction powers.

The Lumia is mounted on a remote control helicopter and flown across the picturesque lakes, desolate shipwrecks and beautiful landscape of the Squamish valley in British Columbia, Canada. Gorgeous.

Nokia highlights the image stabilisation technology in the Lumia, which allows the camera kit to move slightly in compensation for the infinitesimal movements of the phone.

You see, unless your phone or camera is on a hard surface, it’s probably shaking slightly – even if you think you’re holding it really, really still, your hand is still shaking very slightly.

If you’re excited about the new Lumia, Vodafone is the first British network to confirm it will sell the new phone, whatever it turns out to be called.

The new Nokia will be unveiled right here in that London on Tuesday.