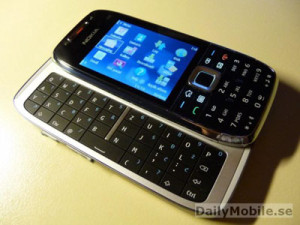 Another Nokia phone being released?

The 5800 XpressMusic (aka Tube) only hit these shores on Friday (see my piece for Huliq.com).

It’s not like that Nokia have skimped on the specs either for this business slider with a QWERTY keypad.

It’s sporting a 2.4 inch QVGA screen, HSDPA, Wi-Fi, Bluetooth and a 3.2 megapixel camera but unlike the latest Nok offings, the 5800 XpressMusic and Nokia N97 to name a couple, thereâ€™s no touchscreen.

But lets face it – if it’s anything like the rest of the E Series, it’ll still get the job done 🙂

The E75 is expected to be on show at Mobile World Congress in Spain next month, according to the folks at DailyMobile.se.