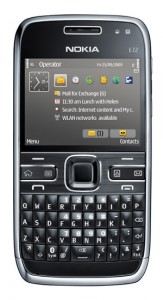 Nokia‘s successor to the E71, cunningly named the E72, was leaked via a promo video but now Nokia has now officially announced the launch of the new Eseries smartphone.

The E72 steps-up from the E71 with a new “desktop-like” email experience with which you get onboard clients for Mail for Exchange and IBM Lotus Notes Traveler as well as access to Yahoo! Mail, Gmail, Windows Live Hotmail and Ovi Mail.

The new Nok gets a 5-megapixel camera, a standard 3.5mm audio jack and IM accounts via Nokia Messaging.

This smartphone also gets equipped with faster internet speeds, A-GPS and compass with integrated Nokia Maps, active noise cancellation, and a torch function that can be activated with a press of the spacebar key.

Nokia says that the E72 is a “swift, slim and resourceful” QWERTY smartphone that will apparently bring a “rich mobile email and instant messaging experience right out of the box”.

The E72 will also get a new version of Quickoffice, which delivers Microsoft Office 2007 compatibility as well as free version upgrades when new features become available.