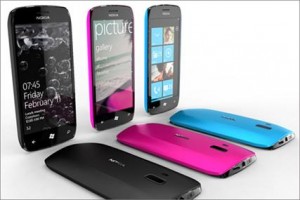 You wonderfully informed readers of GadgetyNews are obviously aware that Nokia has teamed up with Microsoft Windows Phone 7 as its choice of OS – but how much is Nokia willing to bet that this partnership will be successful?

How does the rather tasty sum of £80 million sound?

This is the figure being bounced around that will be spent by Espoo on ad campaigns and branding for its new Windows Phones. Expect not being able to move for these ads from October, when these new Noks are set to hit shelves.

These will be apparently in tune with the various nations that they will shown to.

Adam Johnson, head of brand and campaigns at Nokia, said: “Nokia is committed to authenticity in our communications, using characters and situations that the British public can relate to.”

The campaign is set to run for six months and underlines how important the need for the Finns to turn things around for their company.

The repositioning comes as Nokia battles to retain market share in the face of competition from rivals such as Apple, RIM, and HTC. In April, Nokia’s chief executive, Stephen Elop, announced the loss of 7000 jobs, including 700 in the UK.

This partnership is not a one-way street though. Nokia will be hoping that they can help Microsoft grab a larger slice of the smartphone pie which, at present, is said to account for the minimal share of 4% globally.