Nokia and Windows Phone 7 in a Tree…. 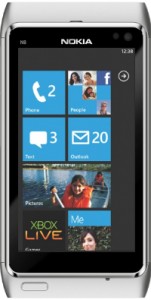 If you read my hands-on review of the Nokia N8 – in my humble opinion it was only really the clunky operating system that let the premium handset down.

It seems that Nokia may be taking my (and others) opinions on-board and could be about to make an announcement regarding a change of OS.

This all stems from comments made by Nokia CEO Stephen Elop where he stated “We must build, catalyse or join a competitive ecosystem.”

Various anylysts are hoping that the “join” in his comment is pointing towards a team up with Windows Phone 7.

Gartner analyst, Carolina Milanesi, told the New York Times: “I donâ€™t know if this is just wishful thinking, but it could definitely be the big announcement we are expecting,” and Canalys analyst Pete Cunningham agrees: “I can see how this could benefit both companies.”

This was the reaction after Nokia’s share price rose more than 4% after Berenberg Bank analyst Adnaan Ahmad wrote an open letter to Elop and Microsoft CEO Steve Ballmer the crux of which is basically — stop being so coy and get a room — or, words to that effect:

See what I mean?

Elop will be making an important announcement next Friday (11 February) in London to investors, and is expected to talk for the first time in depth about his long term plans for Nokia.

That’s just a few days before they rock up at the Mobile World Congress show.Â  Could this be a tech engagement between them and Windows Phone 7 or will they be hoping Android will have seen their moves and got jealous enough to get their seduction on?

What would you prefer – WinPho7 or Android on your Nok?