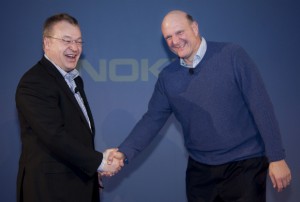 And so it comes to pass – Nokia is to start making Windows Phone 7 handsets in order to claw back a slice of the pie and to jump off the “burning platform“.

The Finnish company revealed its new “strategic partnership” with Microsoft early this morning, but confirmed it won’t be killing off the Symbian or MeeGo operating systems as a result.

No device was unveiled but Nokia did announce that it will adopt Windows Phone as its “principal smart-phone strategy“, merging its hardware know-how, especially with cameras, with Microsoft’s software and services. Apparently they’ve been snuggling up since November!

It seems that both companies will buddy up to work on the future of Windows Phone. Nokia will use Microsoft’s Bing search across all its devices and the Ovi Store will be “integrated” with Microsoft’s WinPho 7 Marketplace for apps and content.

Hmm…. I’m guessing he means iOS, Android and WinPho 7 – so, he’s discounting those Canadians over at RIM then?

So, why not Android then? It turns out that Nokia chatted with Google but Elop didn’t want Nokia to become just another Android phone maker so “Microsoft was the best opportunity to build, and lead, and fight.”

The big M’s Steve Ballmer said the deal is not exclusive and Microsoft will continue working with other phone cobblers but he did point out that “There’s things we’re doing with Nokia that are unique“. This does sound like a player – yeah, I sleep with them but I love you…. I can only imagine that’s how HTC, LG and Samsung are seeing this.

Symbian will still be around for a few years yet though with Nok expecting to still sell 150 million Symbian smart phones over the coming years (there are 200 million around today).

There seems to be no word on when we’ll actually see at NokPho 7 device and when questioned both Elop and Ballmer both ducked and dived away from the subject. The nearest to answers were Elop’s “We aren’t making a specific announcement of when that will be,” and Ballmer’s “When there’s news there will be news.”