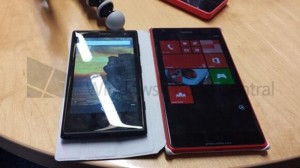 Looking for a super-sized Windows Phone-powered Nokia? Well, the first picture of Nokia’s rumoured 1520 phablet has just been published.

Word is that this here picture is of Nokia’s upcoming smartphone which features a screen size of more than 6-inches.

For scale, the phone on the left side of the picture is the recently launched Nokia Lumia 1020 which appears dwarfed by the giant Nok.

The phone is apparently powered by a quad-core processor, and packs a 20-megapixel rear camera whilst running the latest version of Windows Phone 8 – GDR3.

According to reports, the Finnish phone cobbler planning to unveil the Lumia 1520 alongside its also rumoured Windows RT tablet.