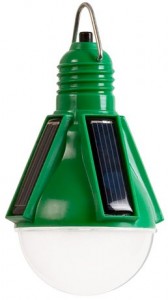 This is a pretty neat idea for the festival season, although these clever bulbs have been designed with a much more serious purpose then helping you find your stash.

You see Nokero has put the N100, the “world’s first” solar light bulb, together for it to be used in developing nations where continual electricity is something still futuristic.

The Nokero N100 consists of an ultra-rugged, rainproof enclosure that contains a quartet of solar panels. Illumination is provided by five LEDS via a replaceable nickel hydride battery.

When charged it should light the way for between 2-4 hours and the battery should last for a couple of years before needing to be swapped for a new one.

The cost of one of these green lights is around $15 when bought as a one-off. Buy in bulk, however, and the price should drop to six-bucks a shot.

What confuses me is that it looks to have a ‘screw-in’ fitting but then a button on the end to turn it on/off. I’m guessing that’s just for aesthetics right?

Hopefully these should be being shipped off to parts of India and Africa soon.