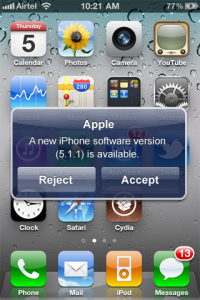 Fed up with having to plug in your iPhone, iPad or iPod to your computer just to update their operating system? Well, that could well become a thing of the past as thereâ€™s rumblings that iOS 5 will hand those Apple devices over-the-air updates.

It appears that Apple has been chatting with Verizon Wireless in order to provide over-the-air updates (ota) â€“ the grapevine, however, seems a little reticent to say if the same discussions are happening with AT&T or any of the UK operators.

Where this initially sounds like updating Nirvana thereâ€™s one major stumbling block. Todayâ€™s Location Tracking fix update (iOS 4.3.3) was a hefty 662MB or so â€“ when thereâ€™s a slightly large app you have to hook-up to Wi-Fi to grab it so an iOS update would have to be just that, an update, and not a complete download of the entire operating system.

Perhaps Apple will start to sling over updates as soon as the little bits are sorted instead of waiting for there to be enough tweaks to make plugging in your iDevice into your puter worthwhile â€“ that way the piecemeal updates could waft over on 3G or Wi-Fi if needed.

Itâ€™s a given that iOS 5 will appear at the same time as iPhone 5 / iPhone 4S so thereâ€™s a few months to wait seeing as rumours say that the next gen iPhone wont make an appearance til September â€“ any one seeing the point of the white iPhone 4 release?