No More Woof – hear your dog’s words and thoughts 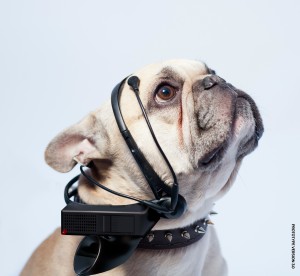 How many times have dog owners said “I wish I knew what my pooch was trying to tell me”? Well, No More Woof claims to translate your mutt’s inner thoughts in to words.

This isn’t an extremely belated/early April Fools prank or something ripped directly from a Pixar flick. This is an actual thing from the minds of actual, real scientists. In fact, you can order one for about £40 today.

No More Woof (NMW) is a genuine product with a real prototype that has been developed by reputable scientists in Scandinavia. They are also asking for your money on crowdfunding site Indiegogo so that they can put it in to production.

They do, however, stress that this is still a work in progress but their demo video does make a good case for it.

No More Woof straps an electro-encephalograph (EEG) reader to your ‘best friend’s’ bonce with a tiny Raspberry Pi computer taking on the duties of translating what your furry car and cat-chaser is thinking in to English. Just in case you were wondering, there’s plans for Mandarin, French and Spanish to be added soon.

According to the project’s website “The technology used in No More Woof is the result of combining the latest technologies in three different tech-areas, EEG-sensoring, micro computing and special brain-computer interface software”.

Apparently the device can recognise states of thought, such as hunger, and then play a phrase such as, “I’m hungry!”

Its developers are working on different ‘characters’ with different phrases to match the dog’s breeding – there’s posh Holly (“This is splendid!”) and Pudge, who really needs to lighten up a little with his “I’m so very weary” dejection.

NMW is being developed by the Nordic Society for Invention and Discovery who’ve tested the device on their own pets. They stress that you’d be buying a prototype, not a finished product, and that your money will be used to develop it further.

They do state that “Right now we are only scraping the surface of possibilities; the project is only in its cradle,” adding “And to be completely honest, the first version will be quite rudimentary. But hey, the first computer was pretty crappy too.”

“A similar device can be hooked up on humans translating our thoughts into dog,” perhaps “or other animal tongue like, oh sweet thought, a dolphin!”

$65 (£40) buys the most basic NMW Micro unit with one sensor, which will be able to “distinguish 2-3 thought patterns, most likely Tiredness, Hunger and Curiosity”.

$300 (£185) buys another sensor, and more thought patterns, while $1,200 (£735) buys a fully customised unit in whatever colour you want, and an experimental learning mode that should be able to produce more complex phrases over time.

All are very limited edition, with only 50 Micros on offer, and a modest funding goal of $10,000.

They must be barking!