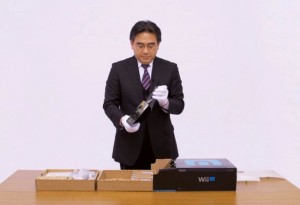 Counting the days til the Nintedon Wii U lands in the stores later this month? Well Ninte President Satoru Iwta has captured his own unboxing of the new Wii console for your delectation and delight.

Satoru Iwata has unboxed the new Nintedo Wii U console and filmed it so you can enjoy the moment vicariously.

The Wii U launches on November 30th in the UK – but Nintendo wants to give you a glimpse at what comes with its new console.

Satoru Iwata slips on his white gloves and dives into the Wii U box. The president carefully unpacks the contents and gives them a good flash.

Being the president he naturally unboxes the Premium Pack, which contains the sleek glossy black console as well as a matching GamePad controller. Other contents include stands for both the console and the GamePad, a chunky power adapter for the console, another smaller power adapter for the GamePad, a beta invitation for the Dragon Quest Wii U game and a HDMI cable.

Iwata explained user accounts on the new console, with up to 12 players able to register on the same Wii U with individual settings and game saves kept in storage. With multiplayer games, your progress (and victories) will also be saved across all participating accounts. Even play history and internet bookmarks will be tied alongside your profile, avoiding future family arguments.

If you’ve built up a collection of retro games on your original Wii, Nintendo confirmed that these will be transferrable to the latest hardware through SD card.

Nintendo explained that you will be able to pause mid-game on the GamePad and use the built-in internet browser without reseting the game – which could be handy.

The Nintendo Wii U launches in the US on November 18th, UK on November 30th and Japan on December 8th. Will you be getting one?