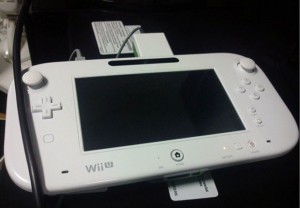 Has the Nintendo Wii U tablet controller had a refresh already?

A tweet from a games tester may have leaked the ready-to-release version of Nintendo’s much talked about controller for use with their next generation Wii console.

Matty Boosh, An employee at TT Games, the company behind titles such as Lego Harry Potter and Lego Star Wars, tweeted the pic along with the message: “Nintendo fanboys alert: look what we have at work! #BoysAndTheirToys”.

The tablet control features dual analogue sticks in place of the circle pads which may point at Nintendo aiming the new console at a more arcade-like experience.

After spending some time playing spot-the-difference with an original pic I have noticed that the Wii U logo is now at the bottom left-hand corner of the control, and the plus and minus buttons are now on the right. The Home button now appears to have an Xbox 360-style ring light and the control’s edges seem to be more ergonomic with a more pronounced slope.

There’s a couple of unmarked button-like jobs which may be custom assignable buttons or, perhaps, just there to taunt me. Have a look – one is just below the d-pad and the other sits between the battery light and power button. Any ideas?

It makes a change to see something that at least looks like the real deal instead of a dodgy Photoshopped image or wishful render.

Adding credence to the leak is the fact that the the tweet was pulled within moments of it hitting the Twittersphere.

I’m thinking that Matty may well be in a spot of bother.

There’s only a few weeks til all will be revealed at the E3 games expo.

E3 is running between June 5-7th this year over in Los Angeles.