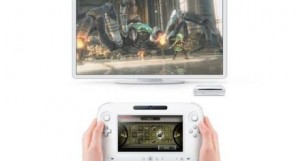 We have been expecting this for a while and with the recent price cuts hitting the Nintendo Wii it came as no surprise that Ninty unveiled its second-generation Wii at E3.

After selling 86 million Wii consoles it was time for Nintedo to build upon that – they have named the successor to the Wii the Nintendo Wii U.

An odd choice you may say but remember the first time Nintendo announced the name of the Wii?

“You might remember how the Wii name began to make perfect sense once you started hearing it as Wii. It was clear how much fun we all had playing together,” said Nintendo of America boss Reggie Fils-Aime.

“But in thinking about a new Nintendo system we knew the prevailing thought would be this: yes, the game would probably be right for all of us, but could it also be a perfect fit just for you.

“The answer to that question is an emphatic: Absolutely. Today, welcome to the world of Wii U.”

The new Wii U console follows the Wii design â€“ itâ€™s a small, white, rounded box which will feel at home amongst the rest of your tech that sits under your telly. However, the Wii U will happily squirt out video in HD via HDMI to your big screen. This now puts Nintendo games in the same arena as those enjoyed on the Xbox 360 and Sony PlayStation 3.

The new console stores everything on internal Flash memory which can be boosted by SD card or a USB stick. It still plays optical disks including your Wii game back-catalogue. The Wii U will also play nice with all existing Wii controllers (including the Wii Balance Board).

“Imagine a shooter like Battlefield with jaw-dropping graphics and smooth animations from the Frostbite engine, brought to you on a Nintendo system with that brilliant controllerâ€¦ We can’t wait to see EA games on this new system.”

Wii U has its own Touchscreen Tablet controller

Undoubtedly the main star of the Wii U announcement was the 6.2-inch touchscreen tablet controller. The Wii U tablet packs in an accelerometer and gyroscope for motion control, dual analogue sticks, rumble feedback, a D-pad, a front-facing camera, triggers and shoulder buttons, start/select/home buttons and a microphone.

On the left you’ll find a Circle pad analogue stick, which looks just like the one on the 3DS. There’s a classic Nintendo D-Pad underneath that, while over on the right there’s the secondary Circle Pad, four face buttons, two shoulder bumpers and two trigger buttons as well.

The horizontal grip that runs underneath the tablet is â€˜handyâ€™ and this is where two of the system’s triggers live – the remaining two being on the shoulder of the main body of the device.

Each Wii U console will come with one of these groovy new wireless controllers and they will be able to take up to four additional Wii Remote or Wii Remote Plus controllers.

Like the 3DS, the controller also comes with a stylus. How long before that goes missing down the side of the sofa? Thankfully it doesn’t look like you HAVE to use the stylus as prodding and poking the touchscreen with your fingers appears to do the trick.

Even though this new controller might look a little daunting it should feel familiar to those that have used touchscreen devices before as well as those battle-hardened gamers who are used to the button-heavy Xbox 360 and PS3 controllers. In fact, the button layout is almost identical to those other consoles.

The web browser seems to work on the controller’s touchscreen independently of the image on your gogglebox as well as having the option to appear on your larger screen.

According to IBM, Nintendo’s Wii U is powered by a custom 45nm multi-core Power processor with embedded DRAM.

“IBM’s embedded dynamic random access memory will help deliver a thrilling new game experience to Nintendo fans. The new memory technology, a key element of the new Power microprocessor that IBM is building for the Nintendo Wii U console, can triple the amount of memory contained on a single chip, making for extreme game play.”

Wii U’s graphics carry on the ATI heritage of the Wii, with a custom AMD Radeon HD GPU according to Kotaku.

You can play games solely on the Wii U touchscreen controller

Because the controller communicates wirelessly with the console this opens up some nifty Ninty possibilities. Should your partner want to catch up with their Soaps you can switch the view from your telly to the 6.2-inch screen.

“Up until now, home console games had to occupy the TV screen in order to be played. But, the new controller for Wii U with 6.2-inch screen means you won’t need to give up your gameplay when someone else comes in the room and wants to watch a TV program.

“But, the new controller for Wii U with 6.2-inch screen means you won’t need to give up your gameplay when someone else comes in the room and wants to watch a TV program.”

The transfer from playing the game on your TV to the screen in your hand happens pretty much immediately. Games can also make use of both screens.

In multiplayer games the player using the new controller can have a different experience than those looking at the TV.

Remember though – this is just a controller. No taking it on the tube for the the commute 😉

Thereâ€™ll be plenty of Wii U games

“Wii U was created so that the widest variety of games can be supported,” says Nintendo. “That means those aimed at experienced controllers that can use circle controllers using both their hands, plus those games that can be intuitively played without the need for any buttons.”

Games design guru Shigeru Miyamoto says of Nintendo’s new home console: “More than anything I’m really looking forward to new styles of play… There are so many we’re just trying to decide where to begin.”

Ninty announced new content based on its own franchises such as Mario and Zelda as well as word coming that the likes of EA, Ubisoft and Sega have been flashing their new â€˜hardcoreâ€™ games for Nintendo’s Wii U with the looks and feel of new titles made for PS3 and Xbox 360.

Nintendo is clearly hoping to recapture the hardcore market which has always been a bit ‘sniffy’ at the gaming on the Wii.

Easy tiger! The word ‘prototype’ was bandied around quite regularly by Nintendo so I wouldnâ€™t expect the finished product to appear til April 2012 at the earliest. Nintendo has confirmed that it won’t launch in financial year 2012.

Nintendo US boss Reggie Fil-Aime stated in an interview that the E3 unveiling was “a year away from when the system’s going to launch”. That kinda pushes it to summer 2012 then.

And what about the Wii U’s UK price?