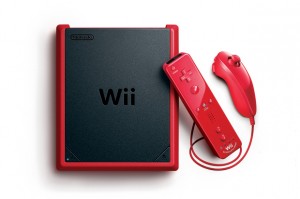 The Nintendo Wii Mini landed in my motherland, Canada, a while ago and it must be selling ok as the UK will soon be able to get the budget Wii gamer.

The shrunken version of Nintendo’s motion-sensing game-changer has a number of notable changes, other than the amount of room it will take up under your telly.

The Nintendo Wii has lost its internet connectivity and backwards compatibility which may make most gamers run and hide behind the sofa – but, as a gaming machine for all the family it could well be a good, bank account-friendly idea.

Let’s face it – it does have a touch of the ‘my first gaming console’ about it.

There’s no official word on how much the Nintendo Wii Mini will cost when it lands on March 22nd but it’s safe to say it will be under £80 (it costs $99 CDN = £63). If not then Ninte are being cheeky 😉