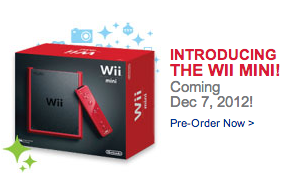 Nintendo have shrunken the Wii and it’s up for preorder!

Nintendo’s game changer has remained pretty much the same as it appeared on launch day, whereas Sony’s PlayStation 3 and the Microsoft Xbox 360 have both seen physical hardware design changes in their time.

Now that the Nintendo Wii U has been launched they’ve also decided to give the Wii a makeover and have named it the Wii Mini.

The Wii Mini has been splashed over the Best Buy Canada website. Nintendo hasn’t made any official announcement, and pricing details still aren’t known, but the box art depicted in the image shows a two-tone black and red console which will have been shrunken in keeping with its Mini tag.

The Wii Mini has been rumored in the past, and is expected to ship with essentially the same load of accessories as its predecessor (one Wii Remote Plus with jacket, one Nunchuk, sensor bar), but no word so far on what software will come bundled in the box.

Would you be happy to get a Wii Mini as a stocking stuffer?