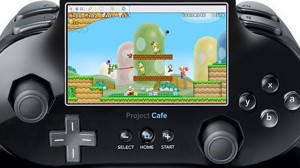 Nintendo already announced it will roll out the next Wii gaming console at the E3 2011 conference in L.A. in a few days time but now a reliable source has confirmed details of the much-rumored next gen Wiiâ€™s controller.

We already knew that the Wii 2, or Project Cafe, would come with a tasty new controller and that it would be rocking some kind of touchscreen. but the source has now confirmed that the touchscreen with a â€œsize of about 6 inches”, as well as a camera on board and that this will give users tablet-like control of games. The controller will be powered by a built-in rechargeable battery.

All reports are pointing at a mid-2012 release of the Wii HD – or will it be called WiiII, Wii 2 or keep something coffee related from it’s Project Cafe codename? Well, Nintendo is still keeping that to themselves.

Other reports have the Project Cafe hardware being loaded with a 766MHz AMD RV770 processor, 512MB of XDR2 DRAM, Blu-ray support, and HD video. Apparently it could also be backward compatible with both GameCube and Wii discs.

As to how close all this is to reality? Well, we just have to wait til the Nintendo press conference at E3, as leaked back in March by EA Games, at the Los Angeles Convention Center on Tuesday, June 7, 2011 at Noon EDT, 9 a.m. PDT.