Nintendo Wii 2 HD to be Announced at E3 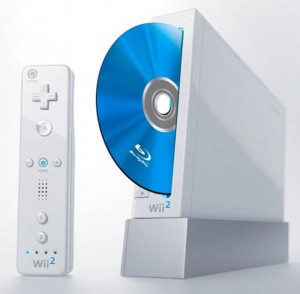 There’s been chat of a Nintendo Wii 2 or Wii HD for quite some time now – but with the UK release of the 3DS a matter of weeks away (and with a software update) word has it that Ninty is prepping a new console for E3 in June.

E3 (the Electronic Entertainment Expo) is where all the gaming folk gather in LA in early June to show off what their latest and greatest is. Last year Nintendo flashed their glasses-free 3D handheld 3DS console and everyone is expecting them to officially out the Wiiâ€™s successor.

It makes perfect sense for Ninty to upgrade the Wii now that everyone has jumped all over its motion controlling unique selling point. Yes, I’m looking at you Sony Move and Microsoft Kinect! Even PCs are getting in on the act!

Funnily enough Nintendo UK is keeping a tight lid on whether this is going to happen or not.

As for what the new Wii will be packing – the rumours that have lasted the longest include that the next gen Wii will be equipped with Blu-ray, a super speedy processor (possibly a quad core number now) and may be endowed with the very curious and confusing addition of an in-built LED projector…