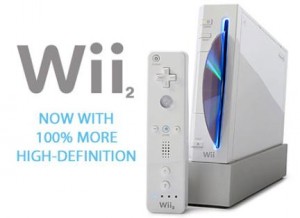 I’ve already mentioned that I am expecting Nintendo to unveil their Wii 2 or Wii HD console at E3 but that was just me thinking out loud really.

Now Frank Gibeau of EA Games fame has been quoted as naming the Wii as a “legacy console” and hinting that Nintendo are indeed putting together an updated version of their bestselling, motion-controlled gaming console.

He also chipped in with his thoughts:

“When you look at Nintendo, for a while there, it was all about the Wii being the biggest entertainment platform ever and capturing the mass market, and it faded away.” and “Now, theyâ€™re coming back with a second act.”

On the subject of the late arrivals to the motion gaming party Gibeau reckons that the next Nintendo Wii 2 would be able to compete head on with its rivals – the PlayStation 3 and Xbox 360: