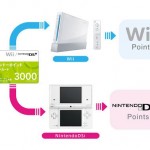 By rebranding “Wii Points” into “Nintendo Points” you would think that this was to become an overarching account system between the Wii and the upcoming DSi.

But that is where you become disappointed to learn that the company’s new Nintendo Points won’t be transferable between the two consoles.

Instead, when you buy a points card (available in 1000, 3000 and 5000 points versions), you’ll have to pick a console and spend all the points in that one place.

Not exactly an ideal option, to be sure, but it seems like it’s one that we’ll be stuck with — unless Nintendo has some plans to make some major changes to the way the Wii and DSi do business.

Siliconera via Wiifanboy via gamesindustry.biz