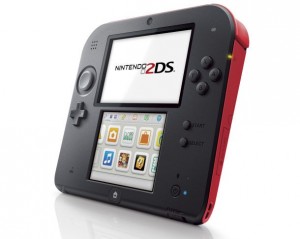 As most of the gaming world is either chatting about Xbox One, PS4 or the Steam Box, Nintendo is bringing a new, old-looking handheld to the table.

Nintendo’s next move in the world of portable gaming is called the 2DS.

As its name suggests, it’s a flat, 2D version of Ninte’s 3DS without the hinge or three dimensional graphics.

IGN reports that the 2DS will come in red and blue (with the front either being black or white, depending upon region) and will cost $129 when it arrives on October 12.

For your money you get a handheld that packs dual screens, two cameras round the back, a single speaker and a 3.5mm headphone jack, plus a 4GB SD card.

The new handheld is considered to be a part of the 3DS family in as much as it will play all 3DS and regular Nintendo DS games, and also provides access to 3DS apps like the Nintendo eShop.

Nintendo is positioning the 2DS as a far more affordable option than the $169 3DS. I think they’re hoping the $40 in parent’s pockets will make it a stronger case for kids.

Check out the official trailer below: