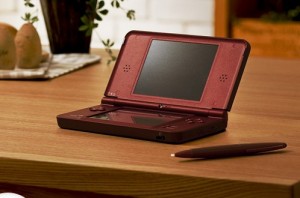 Remember the super-sized Nintendo DSi with the large screen from a coupla weeks ago?

Well now there’s an official flick for it.

This is the first screening for the Nintendo DSi XL (or LL as itâ€™s known in Japan) from the larger hand-held. The good thing is that it gives you a good idea of both the size of the screen and the extra large prodding stick – or stylus as they call it.

As you may recall – the target market are those that are not as nimble or well sighted as they used to be.

Also on the vid is a shot of all the mellow colours that it will be coming in.

Not exactly the peeper abusing shades of the PSPgo.