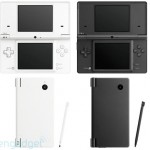 The new Nintendo DSi will still retain both touch screens, although both displays have had an increase in size to 3.25â€³ from its original 3â€³.

Everyone will appreciate a combinedÂ extra half-inch.

In addition to the screenageÂ the DSi has slimmed down by 12% compared to its predecessor, partly due to the omission of the GBA cartridge slot.

That’s a little odd as games likeÂ Guitar Hero: On Tour (a game that requires the Guitar controller add-on which fits into the GBA cartridge slot nicely) wonâ€™t work on the new DSi.

Other improvements include a front-facing VGA camera located on the inside hinge, while a 3 megapixel external camera will compete with your cell phone for casual photographs.

Not only that, the DSi will support SD memory cards with a new SD card slot, and the integrated browser application makes it a contender for the iPod touch since you can also play back your favorite MP3s!

The Nintendo DSi isÂ said to be out inÂ Japan on November 1st for $179 or thereabouts.

The rest of the world will get itÂ next year at some point.

Will you be chopping in your old DS for the DSi?