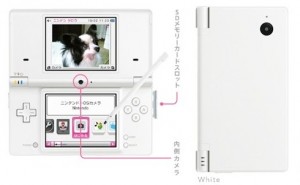 The long wait for your Nintendo DSi is almost over people!

The gaming machine packs two cameras, one facing inside and one on the outside.

These detect motion, which means you can now control games via hand and head movements, and can also be used to snap photos of yourself or your mates.

The DSi also hasÂ theÂ DSi Ware download service that offers a range of custom-made games and apps, including a free web browser.

Before you ask: you can stillÂ play the 1,000+Â regular cartridge-based DS games as well.

If you’re after one of these I’d say to join the queue earlier rather than later as when it went on sale in Japan it shifted 170,000 in just two days – selling out almost immediately.

It’ll cost youÂ around Â£144.97Â and if you don’t want to queue up why not just get it fromÂ Amazon