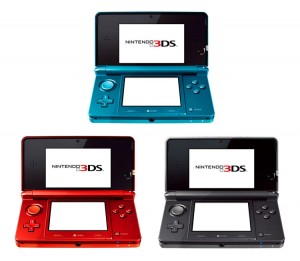 The results are in. Nintendo has managed to shift a decent amount of their 3D gaming hand held and are pretty happy with themselves – even though the figures have failed to hit the heady heights predicted through pre-orders.

113,000 Nintendo 3DS’s were grabbed during the opening weekend which is still a record for Nintendo UK

Last week Ninty announced that pre-orders alone stood at 140,000 which gave those in the guessing game the bravery to predict that overall sales would hit 150,000 to 200,000.

Even with my poor maths skills I can see that there must have been some erroneous info getting back to Nintendo. This would be the reason for the initial sales figures appearing more than a little weak.

The source of this confusion has the finger pointing at the possibility that some large retailers inflated their customer pre-orders so that they could get extra stock of the 3DS and not fall short just in case there was a real rush for the multi-dimensional gamer. Tsk, tsk!

When you look at the previous Nintendo UK launches – the DSi managed 90,000 units while the Wii clocked up 106,000. So, even though the real figure is considerably lower than the projection – 113,000 units shifted does represent Ninty’s most successful UK hardware launch to date.

No grumbles from retailers either – every major chain, from specialists to supermarkets, are tickled pink with the business generated by the new handheld.

Did you bag a 3DS? What are your thoughts about it?