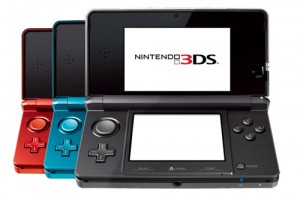 Whilst the iPad 2 was flying off the shelves to the point where there’s none left in the UK apparently – early word over in the Nintendo 3DS camp tell a very different story.

Even though the sales figures for European hardware are never released – judging by the games charts it’s not great news for the multi-dimensional Nintendo handheld.

What should have been a Nintendo 3D gaming blitz of a weekend the top gaming title for the 3DS was Super Street Fighter IV: 3D edition which struggled to up itself up to heady heights of 6th place on the individual formats chart despite being the 3DS’ best performing title.

Then you have to slide down another couple of notches before you meet the next best 3DS offering – Pilotwings Resort in at 8.

Annoyingly in 7th place is Pokemon White – a title for the 2D DS.

If you’re wondering who the king of the castle was – Crysis 2 was top this weekend, leading both the individual and multiformat charts. But no one likes a smart ar$e do they? 😉

Other owners are having a grumble at what is being called the Black Screen of Death – The screen, which advises gamers to:

“hold down the POWER button to turn off the power, then turn it on and try again”

Games that appear to generate the warning include Super Monkey Ball 3D, Super Street Fighter IV 3D Edition and Ghost Recon. The message goes on to say that “if the problem persists, please contact your local customer support centre”.

Have you grabbed a Nintendo 3DS? What do you think about it? Is it living up to the hype or are you being plagued by the Black Screen of Death?