Nintendo 3DS Has Rotating Screen and Whiff of Unicorn – Real or Render? 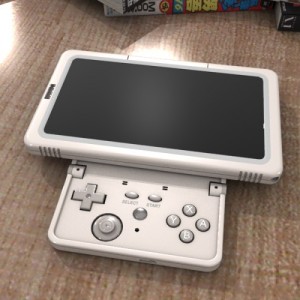 People are getting a bit good at rendering what they want their next gen bit of tech to look like so I’ll state now that I’m not 100% whether this is real or wishful thinking.

Either way, this is a rather groovy idea as to what the Nintendo 3DS could look like.

All the boxes seem to have been ticked. So, autostereoscopic touchscreen, a resolution of 854Ã—512 and that screen will react nicely to stylus and finger prods. We already know that.

With this version you even get that dual screen mode to replicate the functionality of the current DS games. Neat! 🙂

You all with me this far yeah?

Well, now we enter a world of possible unicorns. This alleged device has the power to generate 3D objects in a augmented reality mode using two rear-facing cameras and sensor. This very sensor can also double as a sort of object scanner to import real objects into the virtual space. Hmmmmmmmmmk……….

This 3DS will match the performance of the PS2 and GameCube and will be able to hook up to the Wii. The article goes on to tell a tale of WiMAX, WiFi, and even an optional keyboard for social networking and blogging. Was that some flying bacon I just saw?

The Nintendo 3DS should hit Japan March 31st 2011 and with an official unveiling at E3 in the coming weeks.

I want to believe but………. all Kokatu has managed to get from Nintendo is: “Nintendo does not comment on rumors and speculation.” But they do have some great pics!