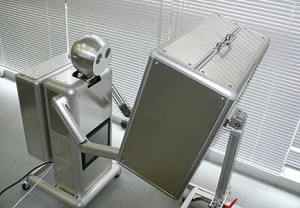 This reading robot handles those old-skool paper and ink numbers.

Nino stands at 1m tall and weighs 25kg and was showcased yesterday for the first time at a robot show in Southern Japan. The robot was jointly developed by two Japanese and one Chinese university.

Ninomiya-kun is able to read through a character recognition software installed on a PC that he carries in his backpack.

His two camera eyes look at a book page and then reads it out loud via his voice synthesiser.

The bookbot is able to distinguish about 2,300 Japanese characters, which is the minimum amount the national school system expects Japanese people to learn at school.

I saw this clever bot on Yomiuri Online via Crunch Gear