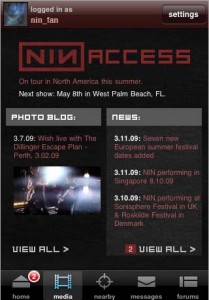 Don’t you just hate it when that happens?

You’re waiting eagerly for something, then you’re busy, then it’s arrived without you knowing.

That’s exactly what happened to me with the nin: access iPhone app.

I knew it was imminent, I’d been watching for Mr Reznor’s tweet stating that it was available for a few days then; what with gigs, going out and general life things I missed it!

So, what does it do?

Well, Nine Inch Nailsâ€™ first and free official iPhone app gives you mobile access to the multimedia and community features of the official website (nin.com) but it is also a new way to exchange real-time messages and photos with other fans in your area.

A quick breakdown of the nin access app features:

– Engage in location-based conversation and share photos with other NIN fans around the world.
– Access the latest NIN news and blog updates.
– Listen to a variety of streaming NIN music, including exclusive playlists and thousands of fan-created remixes.
– View, save, and share images and videos from nin.comâ€™s vast fan-supported media archive.
– Get exclusive free wallpaper images formatted for iPhone & iPod Touch.
– Access to nin.comâ€™s thriving forums.
– Login with your free nin.com account, or create a new one directly from the app.
– Send & receive private messages and view user profiles.

This is a must for any Nine Inch Nails/Trent Reznor fan as well as other musicians looking how they can adopt applications to involve their fanbase even more so.

Anyone else going to the NINJA shows or catching NIN at Sonisphere?