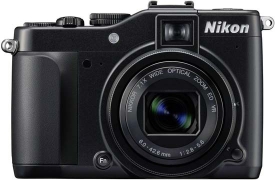 The P7000 is successor to the one-year-old P6000 but its certainly not merely a refresh. Thereâ€™s a new design and extra features that make it a completely different beast altogether.

This new camera is aimed squarely at those considering the current king – the Canon PowerShot G2; they even look alike!

Now, I wont ever lie to you lovely people â€“ and here I have to confess to being more of a point-and-shoot kinda guy and the P7000 is obviously aimed more at those who know what they want from their photography and have an idea what theyâ€™re doing. Slip it into Manual mode and you get full control, including RAW shooting capabilities, an electronic virtual horizon for lining up vertical and horizontal horizons (which is pretty fun as well as useful), and a plethora of controls on a number of dials for immediate and physical adjustment.

The P7000â€™s body is thicker and heavier than the P6000 model that it replaces, partly to house that optical viewfinder and large lens (it protrudes some 5cms from the body at full zoom). This is not a pocket camera unless youâ€™re wearing a big coat as I was when I went out to test this thing – but that zoom and focal length combo wins over both the P6000 and the Canon PowerShot G12 for usability. Also I found the feel of the P7000 reassuringly solidly built but not too heavy thanks to its magnesium alloy chassis. Itâ€™s all well put together.

There are plenty many control dials for the aforementioned alterations and tweaking of shots. From right to left thereâ€™s a dial for exposure compensation that has a small orange indicator light when activated, with a customisable AV/TV function button in front of this. The main mode dial is just off-centre to the right of the standard hotshoe and on the far left thereâ€™s a secondary mode dial to quick select and adjust the likes of ISO and White Balance. Again â€“ Iâ€™ve had to look to see what some of that means 😉

On the rear thereâ€™s also a thumbwheel, much like one found on a DSLR camera, and a D-pad that doubles up as both a four-way pad and rotational wheel to also cycle through options. Having both the thumbwheel and rotational D-pad is similar to having twin wheels and is apparently ideal for adjusting aperture and shutter speed values in manual mode independently. I had a play and some of my pictures came good.

What I did find was that using all these wheels and dials was much easier than having to delve deeper and deeper into settings menus and then getting confused by list after list. More dials please camera makers!

The front of the Nikon Coolpix P7000 features the aforementioned 7x zoom lens surrounded by a metal ring that can be unscrewed to allow for things such as wide angle or telephoto converters to be added. The 200mm maximum telephoto setting seems to be an important difference between the P7000 and the G12. This brings great details into view from a distance (see gallery below of St Pauls) and the 28mm wide-angle setting aint too shabby either.

For those that know about things like this – the maximum aperture of f/2.8 at 28mm and f/5.6 at 200mm should be something to make you nod approvingly.

Bottom left of the lens is an Fn button. This clever little button can be mapped with one of six different settings – RAW, ISO, White Balance, Picture Control, D-Lighting and Metering. That basically means that you get one-touch access to some of the more commonly used functions.

More science stuff to make your pictures come out how you want now: The P7000 has a built-in neutral density (ND) filter, which provides a three-stop decrease in the shutter speed, enabling you to use a slower shutter speed in bright surroundings and achieve exactly the creative effect that you want. The clever camera also offers a number of set focal lengths – 28, 35, 50, 85, 105, 135 and 200mm – with the new Zoom Memory function quickly switching to one of them â€“ that should stop the need for a bag full of lenses.

Nikon have also included their VR (Vibration Reduction) image stabilisation system to help prevent camera-shake which Iâ€™d expect to find on a camera at this level to be honest.

In use the P7000 has stacks of good points but it aint perfect. The main thing is the amount of time RAW files take to process through onto the card. Maximum resolution JPEGS are stored in a couple of seconds, but RAW format is a completely different story. When a single RAW frame is fired itâ€™s not possible to do anything for about 4 seconds.

So? Well, this also locks the camera up. A maximum of five RAW frames can be shot in a burst mode before the cameraâ€™s buffer becomes entirely snarled – it takes even longer to clear.

Looking for high speed burst shots in RAW format? – the P7000 probably isnâ€™t for you.

After spending some time with the P7000 I loved how easy it was to start toying with things and made me want to explore more. It feels nice and gives excellent image quality. The lag between some of the menus and the ice-flow rate of the RAW processing ‘speeds’ may be deal breakers.

Weâ€™re not looking at a budget snapper here either, costing around Â£480, but you do get a lot for your cash.

Itâ€™ll just about undercut the Canon G11 and G12 but at this price point the people pondering over that photographic choice will be fairly confident in what theyâ€™re looking for.

Those looking for top-notch picture quality, detail and sharpness will be pleased to hear that the P7000 most certainly delivers. There’s no unwanted noise at ISO 100-400, a bit is apparent at 800 and 1600 but itâ€™s all pretty much usable.

I also liked the excellent LCD screen â€“ just a shame that itâ€™s fixed and not a nimble flick out twisty-turny number though.

That 28-200mm zoom is more versatile than the G12’s and the 720p movies with stereo sound record smoothly and the frame rate provides great playback – the autofocus mode is relatively swift (again, could be slightly better to be honest). The zoom is nice and smooth in vid mode and the port for an external mic is handy.

All in all I can say that Iâ€™m impressed by the Nikon Coolpix P7000, and reckon it is probably the one Iâ€™d chose if I was looking for a pro-level compact. The RAW and menu lag may just need software tweaks and then it’ll be be almost unbeatable. Iâ€™ll just need to learn what all those settings mean 😉