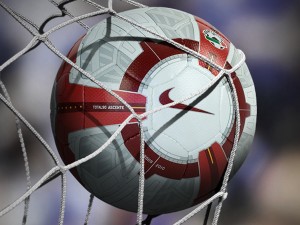 As you will know, if you watch overpaid sportsmen running around kicking a ball, the new season soon kicks off for the three big football leaguesâ€”Englandâ€™s Premier League, Spainâ€™s La Liga, and Italyâ€™s Serie A.

New season, new balls – Nike has developed a fancy-schmancy ball for them and thatâ€™s loaded with all types of hi-tech as well as being rounder!

Lemme break it down:

360 Sweet Spot -This refers to the way the ball reacts to being kicked. Usually, footballs have a ‘sweet spot‘  and, apparently the T90 Ascente is one large ‘sweet spot’.  That is, wherever you kick it, the ball will react as if youâ€™ve kicked that all important ‘sweet spot’.

Longer range – The ball is constructed in three layers, and this, by some black magic ju-ju and all round clevernes, somehow manages to make the ball travel two ball lengths longer than previous Nike footballs.

Increased visibility. You see those patterns – well, that’s the idea – they create a â€œflickerâ€ as the ball spins.

The T90 Ascenete is also faster than previous balls, traveling at about 22.19 m/s (72.17 feet/s).   This is also something to do with that three-layer construction.

Check out the vid over at the Nike website.

Back of the net!!