Nike+ GPS – All the Fitness Fun Without Needing Special Trainers 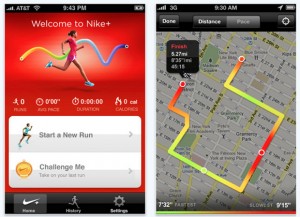 I quite liked the idea of the original Nike fitness app for the iPhone but soon discovered you needed to buy the special sports kit that included a small accelerometer attached or embedded in a shoe. The company even had a recommended Nike+ trainer!

If you were going to get the lot it started to add up.

The whole package could set you back a fair amount.

Now, Nike has launched a new iPhone and iPod touch app that will let you keep track of your running jaunts using GPS, rather than a separate sensor shoved on your foorwear.

Just download the Nike+ GPS app from iTunes for Â£1.19 and you’re ready for the off! It uses GPS and the devices accelerometer to visually map runs, as well as track your pace, distance, time and calories burned. Nice 🙂

It’ll play nice on the iPhone 4 and 3GS, and the second, third and fourth generation iPod touch.

You can even use the app when you’re not moving about outside. When you’re covering your milage on a treadmill as the app records data even when the GPS isn’t working.

However, when the GPS is doing its thing you’ll be able to see your location and use the challenge feature which will push you on to better your performance logged on previous runs.

You also get some feedback from those in the know. Paula Radcliffe and Tour de France victor Lance Armstrong will tell you where you should focus and will also pop up when you beat specified goals or personal bests to give you that virtual high five 🙂

You can get all social with other joggers, runners, sprinters and sporty-types from around the planet via the Nike+ website as well as hooking up on Facebook and Twitter.

Are you happier paying Â£1.19 for the new Nike+ app or could you get by quite nicely thank you using the free RunKeeper app?

Personally this all sounds a bit too much like hard work. TAXI!!!