An internal video has been sent around Google letting it be known which devices and software will be unveiled at the company’s New York 29 October event.

The video being circulated reveals that a Samsung built 10-inch tablet, codenamed “Manta” will be released. Chances are, this tablet will arrive as the Nexus 10.

The Manta/Nexus 10 is noted as running Android 4.2, but rather than this being Key Lime Pie, it will in fact be another increment to the existing Jelly Bean OS.

This Android update will introduce “Content in the Center”, with a Google Play store widget and a ‘tablet sharing’ facility that will enable multiple users to access their own apps and email from the same tablet device.

Other tablet specs include that the Sammy slate’s display will rock 2560×1600 pixel resolution, boast a 16:10 aspect ratio and pack 300ppi. 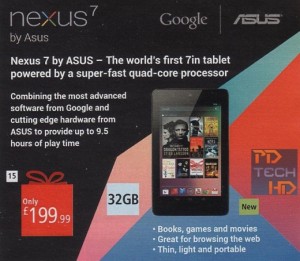 The video is also alleged to confirm the existence of a 32GB version of the Nexus 7 – last week  the Argos Christmas catalogue appeared to reveal as much – though an HSPA+ (3G) variant will also be made available, allowing web surfing away from Wi-Fi.

The video also confirms the specs of the LG Nexus 4

The new Nexus 4 Google phone will be powered by a quad-core 1.5GHz Qualcomm APQ8064 Snapdragon processor and be equipped with a 4.7-inch 1280×768 pixel resolution display and an 8MP rear camera buddied with a 1.3MP snapper up front.

Google’s big reveal is due to take place on 29 October, the same day as I’ll be attending Microsoft’s London Windows Phone 8 event.