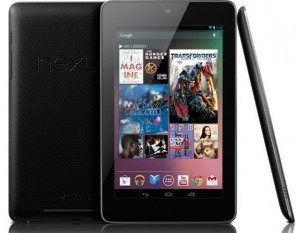 News just in from Three – they’re now offering Google’s Nexus 7 3G tablet on their network for £19.99 per month.

The UK network has just announced that Three will be letting you get your paws on the spanky Nexus 7 32GB 3G tablet from today with an up front payment of £49.99 when you take out a new contract with Three.

The Google Nexus 7 comes with Android 4.1 Jelly Bean and features a 7-inch touchscreen display with a resolution of 1280 x 800 pixels.

Under the hood is a quad core NVIDIA Tegra 3 processor and it also comes with a 12 core GPU. Tasty.

It should appear here by the end of today.