Next MacBooks Are Gonna Be Glassy! 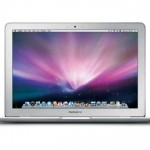 Well, it’s been days since the last Apple Rumour so let’s have another!

Apparently, according to Seth Weintraub, the next generation of MacBooks are supposed to be thinner (no, really!?!) and feature a glass track-pad with multi-touch and gesture support.

Glass is nice to touch just have that Windolene ready folks!

The body of the new MacBooks would be made from a single piece of aluminium.

The new MacBooks will most likely run Intel’s Centrino 2 and are supposed to be out by September!