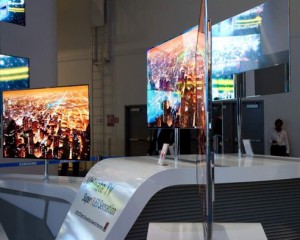 We have all lost keys, USB sticks and even our credit card at some point but Samsung has misplaced something a lot bigger. The major tech manufacturer has lost track of two 55-inch, $10,000 unreleased OLED televisions.

The two hi-tech tellies were on their way to IFA Berlin when they dropped off radar and now Police are investigating their disappearance which could have even been arranged by a competitor.

Samsung as announced that the organic light-emitting diode (OLED) TVs were “lost” during delivery to Berlin for the IFA trade fair.

“Upon Samsung’s request, the Korean and German authorities are currently conducting an investigation,”.

The Austrian Federal Police are taking in to consideration that the televisions have not been officially released, so suspicions of commercial espionage cannot be entirely ruled out.

So, if you’re offered a huge television, no questions asked….