Next generation of Google Nexus 7 tablets on the way in May? 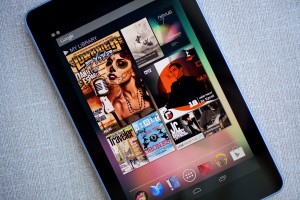 Well, it certainly looks like the Asus-cobbled Nexus 7 has cemented Google’s place in the tablet market. Not to rest on their laurels, it sounds as though the Google slate could be getting specs increase for Google I/O.

Google is apparently preparing to launch the second-generation Nexus 7 in partnership with Asus at Google’s I/O conference in May.

The new tablet will reportedly feature a full-HD display along with a few design tweaks.

By all accounts, engineering samples of the next-generation Nexus 7 have already appeared in the wild and feature a much higher-resolution display along with a thinner design.

We can expect to see a much thinner bezel which would make the device smaller to carry and would almost certainly reduce the weight as well. As long as they don’t make it so thin that you end up selecting things on-screen by accident 😉

Google I/O will also reportedly see the launch of a new version of Google’s Android Jelly Bean operating system, complete with all 12 months hopefully, along with more news about Google’s Project Glass.