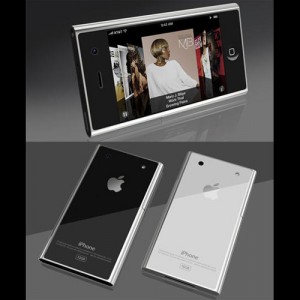 This is what I’ve been expecting/hoping but now ‘industry experts’ are saying that the Apple iPhone 4G will look quite different from the iPhone 3GS.

Barclays analyst Ben Reitzes reckons that Apple â€œwill try to change the game on everybody â€“ it bothers them that everyone stole their form factor.â€

I can totally see where he’s coming from and the fact that Apple has made a name for itself as being a ‘game changer’ the Appley one might be looking to make a leap rather than another minor tweak.

Let’s face it – Since its release in 2007 the iPhoneâ€™s exterior design hasn’t changed but still has become an icon.

In comparison, the iPod did change quite a lot in its first three years.

Would you prefer the iPhone to stay the shape that we’ve all come to know or love or, like me, hope for a change – kinda like the move from the original iMac to the lovely angular modern art pieces that the Apple desktops have become? Perhaps mirroring the MacBook in construction and feel?

C’mon Apple! The HTC Legend has actually beaten you to the aluminium unibody look!