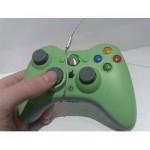 I’ve been expecting a new controller for theÂ Xbox 360 but I thought a motion sensative jobby was on the cards a la WiiMote – instead what they’re offering is a “refined version” of the regular unitÂ with a better D-pad.Â

It will be dressed in limited edition green (frankly it couldn’t be limited enough for me!), and will make controlling games using the D-pad less of a chore apparently.

The pic above comes courtesy of Eurogamer.

You may wake-up now 😉