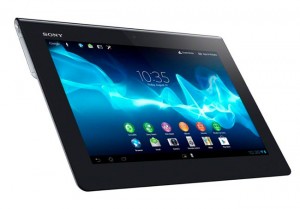 Sony has now officially launched their new Sony Xperia Tablet S at IFA Berlin after a number of pre-show leaks.

The original Tablet S stood out thanks to its unique ‘rolled-back magazine’ wedge design which has now been refined and appears to be less wedgey.

As well as the Sony Xperia Tablet S being unveiled Sony also announced a wealth of accessories for the Xperia Tablet S my favourite being the cool Dock Speaker at £79.99. The keyboard-packing cover has no UK price listed at the time of writing this but in the US it costs $99.99.

You will be available to purchase one of these tablets from September 7th 2012, but you can pre-order a new Xperia Tablet S from right now.