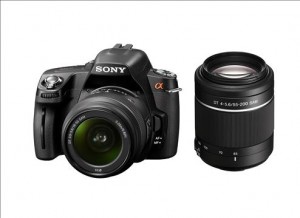 Sony has announced the arrival of their brand spanking new Alpha’s – say hello to the DSLR-A390 and DSLR-A290.

They both come with a friendly on-screen help guide which makes these particularly attractive for first-time DSLR users.

The ‘at-a-glance’ key features of these easy-to-use models are:

Ok, so these new new entry-level snappers both utilise 14 megapixel sensors and walk the more traditional line for those looking for interchangable lenses on their digital cameras rather than those flashy newcomers over in the NEX gang.

The specs on these two Alpha’s are pretty much the same. The main difference I can see is that the 2.7 inch LCD screen tilts and folds on the A390’s where as the A290 has a static screen.

The bodies have had a wash and brush up and now wear a revised button layout as well as a tougher grip design. You get a built-in flash, HDMI output and you are able to shove in SD, SDHC memory as well as Sony’s Memory Stick Pro Duo.

If you happen to own a Sony Bravia HD tele you’ll be able to hook-up your new Alpha via Bravia Sync and control photo slide shows using the TV’s remote.

For your lens swapping needs the Alpha DSLRs sport the A-mount lens format. This means that older Minolta and Konica Minolta AF lenses can be worn 🙂

For me the neat addition of the on-screen help function is surely going to be welcomed by newcomers to the world of manual cameras. It walks you through the cameras features and shows you a sample image so that you can see what each thing does. The exposure guide graphic makes it clear how the aperture and shutter-speed settings relate to each other.

These will both be on the shelves in summertime but no word as yet on prices.