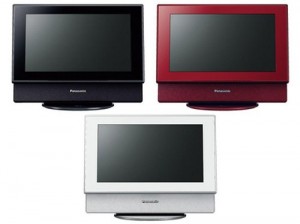 First picture I saw of this little Panasonic lead me to believe that it was a neat portable LCD Television.

Gah – how wrong and foolish do I feel now?

What it is, in fact, is Panasonic‘s new MW-10 “multimedia audio system photo frame”.

Not only will it show pictures held on either its 4GB of internal memory or stuff held on SD cards shoved in the units slot it sports an FM tuner and a built-in CD player to complement the iPod dock.

I’m a little dubious regarding the “audiophile-quality sound” that its supposed to pack but hey – until I hear it then we have to take the word of the press-release I guess.

It was released in Japan last month and is set to hit the states next month for an asking price of $299.95