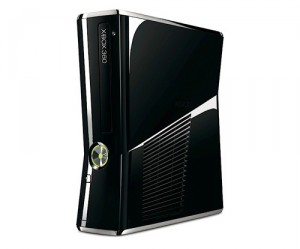 The new Xbox popped up yesterday and there have been a variety of things slowly seeping out onto the interwebs.

Here are the main bits that you should be aware of. Well, obviously, itâ€™s 15% smaller and it’s rocking a brand new Kinect port.

Don’t worry if you want some jump up and down controlling action on your old 360 because you can still enjoy the Kinect but you’ll need an extra external power supply and a USB dongle.

for those of you that like to tweak your spec the skinny Xbox 360 has an upgradable 250GB hard drive which you can get at without the need of special tools via a little hatch. Unfortunately the old Xbox HDD’s are not compatible but existing Data Transfer cables will let you copy content between old and new Xbox 360 models. PHWEW!

Talkin bout cables – the new Xbox gets HDMI out but not the cable. Bit stingy that – Sony gives you one with the PS3 Slim! Microsoft have added an optical audio port along with three additional USB ports which brings the total up to a Rock Band 3-tastic 5!

You get some new beep-when-pressed capacitive power and eject buttons that are said to be very responsive as well as some tweaked controllers that are dressed in black so that everything matches.

Ever had your Xbox stolen? Nah, nor me. But someone must have as the new model sports a Kensington security lock slot at the back so you can fasten it to something sturdy/heavy/vicious.