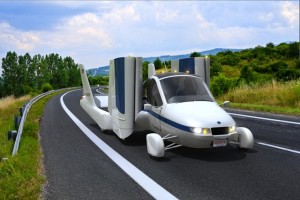 We’re all used to seeing cars getting a face-lift but the motor that’s gotten itself refreshed here is the Terrafugia Transition.

The new-look ‘roadable light sport aircraft’ (that’s flying car to the rest of us) was announced at the AirVenture show at OshKosh.

You’ll be glad to hear that there’s more than cosmetics featuring on the new model. The new 30 miles per gallon car-plane has put on 50kg because of new, and much welcomed, road safety features such as a safety cage, crumple zones and airbags.

The interior still looks like a mash-up of both vehicles but does benefit from a refit. The cockpit/driving seat still looks like a gamers dream with steering wheel, accelerator, brake, joystick and flap controls there’s also a touchscreen display which will swap its readouts depending on which mode you’re in.

Flying is still the safest form of getting from A-to-B and the Transition has the boast-worthy addition of a whole-plane parachute which will make the descent a tad more bearable (and survivable) should that 100hp rear propeller pack in.

Other bits that Terrafugia has concentrated on is the new optimised airfoil. Once the electro-mechanical folding wings are away the rear-wheel drive engine and tuned independent suspension promises “responsive” road handling. Great news if you’re wanting to open up the throttle to the 65mph top speed on a country road. That should confuse those folk who aren’t used to seeing anything other than tractors on their roads! 😉

If you’re perhaps looking for a light aircraft and a new Sunday drive car why not lay down £6,500 to reserve a bit of both? 🙂