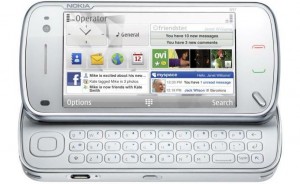 Ooops – it looks like Vodafone Ireland is planning to offer the Nokia N97 “Mini” later this year – well, according to a loose-lipped Vodafone employee.

Ev, a forum moderator for Vodafone Ireland, made the unofficial announcement in a forum thread on the topic of when the operator would be getting the Nokia‘s spanky new flagship handset.

The post, which has since been removed, was screen-grabbed while live and reads as follows:

Looking at Ev’s comments it certainly points to the N97 Mini being something like an N97 lite – a more affordable, stripped down version of the top flight handset.

Ev’s other comments, also removed, suggested that Vodafone will not be getting the Palm Pre when it launches in the UK but would be offering the Storm 2 later this year.

No idea whether Ev has collected their P45 yet.